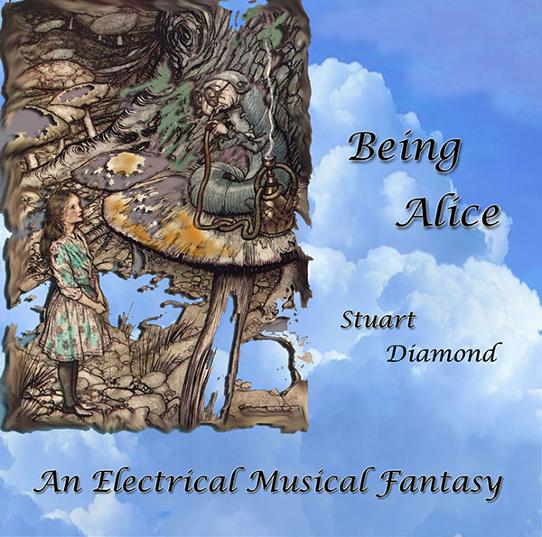 BEING ALICE
Follow links to audio tracks and scores.

BEING ALICE - Ver. 2.0 is a Theme and Variations written as a triple concerto for solo violin, viola and cello with children's string orchestra with optional narration.  The work can also be thought of as a "young person's guide to musical composition," as each variation explores different techniques (inversion, retrograde, mirror, augmentation, canon, etc.)

BEING ALICE Ver. 1.0 is an electronic-symphonic fantasy.  Being Alice was composed completely in midi format using only a Roland 2080 and a Proteus One and a combination of simple computer sequencers. The realistic expression is achieved through dynamic wind control on virtually every musical line and constant shift in tempo parameters. For those who care the work is structured as a double theme and variations, meaning that every movement has variations on the A and B themes found in the Introduction.  The A theme is playful, the second theme is more chromatic with a pulsing underbeat in 9 (4-3-2). The Finale reiterates the previous movements before climaxing in a raucous closing.

Alice, of course, never really intended for her tale to be told. Theory has it that it was the concoction of an intellectual property lawyer who saw its release as an opportunity to exploit the unending market for fables and foibles. Indeed many of the original characters were highly offended by the mischaracterizations of their own self-perception. In fact, both the Queen and the Mad Hatter threatened to sue. But the barrister who originally devised the scheme deftly crafted signed pre-releases that for all practical purposes snuffed out any legal recourse. Thus the Alice Tale has found its way into legend and lore - perhaps not completely accurate but for the most part a fair rendition of what actually did occur.

However, there is a part and parcel of the whole affair that had never come to light - at least not until now. Somehow, somewhere, stuffed in a closet, along with other artifacts and papers recently unearthed was a another manuscript that simply rendered appears to be a musical score. The challenge for the team of archeologisst, editors, orchetrators and arrangers, led by composer and writer Stuart Diamond, was to interpret the fanciful notations into something that is readily interpretable to our modern ears. Thus what is heard here is at best an approximation of what might have been.

There is of course the ongoing metaphysical debate on what the word "being" of the title exactly means. Verb or gerund is always a discussion of the most delicate kind. The question whether it is essential beingness or the being of essence that is prime always generates great deference in Wonderland, especially so considering the nation’s range of beings and its derivatives. Alice, most naturally, on being asked of such matters could only say, "Heidegger, Heydegger, Ho!"